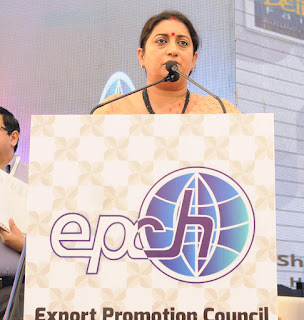 The Union Textiles Minister Smt. Smriti Zubin Irani has
urged the exporting fraternity to take care of the welfare of artisans who are the
backbone of the Sector.  The Minister said that design and product
development play a crucial role in value realisation and in turn in the benefit
that the artisans and producers are able to reap from their products. The Minister
said this after inaugurating IHGF – Delhi Fair Autumn 2017, World’s Largest handicrafts
and gifts fair. The fair is being held at India Expo Centre & Mart, Greater
Noida, during October 12 – 16, 2017.


Delivering the inaugural address, the Minister applauded
the role of Export Promotion Council for Handicrafts in promoting exports of handicrafts.  She noted that handicraft
exports have witnessed a year-on-year growth of 13.15% in 2016-17 and has touched Rs. 24,392
crores.  The Minister appreciated the launch of schemes by EPCH under
their CSR programme, for education of Children of artisans.  The scheme
provides full support to education of Children of artisans through open schools.
75% of the expenditure will be borne by EPCH and 25% by member exporters. Smt.
Irani added that it is the dream of the Hon’ble Prime Minister that no child in
the country should be left illiterate. 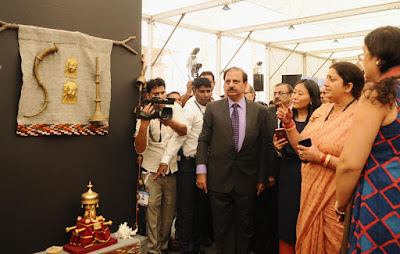 The Minister appreciated the introduction of “Design
Register” scheme by EPCH, which allows hassle-free registration of designs by
member exporters.  She said that EPCH design services will definitely help
the Sector in a big way and will augment the exports of handicrafts from the
country, ultimately increasing employment opportunities to artisans.


The Textiles Minister expressed her satisfaction that the
vision of the Hon’ble Prime Minister to promote the North East is being effectively
implemented by EPCH. EPCH has an integrated programme of development of NER
handicrafts and handlooms, under which support is provided for design, Marketing
and skill development.


The Minister also noted that for the first time for handicrafts
sector, an Initiative is being taken to promote Foreign Direct Investment and opportunities
for Joint Ventures for both exporters and importers.  A symposium on “Investment
Opportunities in Handicrafts Sector” is being organised. This initiative will
give opportunities for overseas buyers to bring Technical know-how, investment
and Marketing networks to form joint ventures for promoting Indian handicrafts
in the world market.

Speaking on the occasion, Chairman, EPCH, Shri O.P.
Prahladka spoke of EPCH’s vision for the next five years on Technology upgradation.
He said EPCH has just started the “Design and Product Development Technology
Mission”. Shri Prahladka also appreciated the support received from Ministry of
Textiles and Ministry of Commerce for the smooth implementation of GST.
The inaugural ceremony was attended by a large number of
overseas buyers. According to Executive Director, EPCH, Mr. Rakesh Kumar, about
2,980 exhibitors of home, lifestyle, Fashion, Textiles and furniture are
participating in the IHGF Delhi Fair.  Over 6,000 buyers from 110
countries are visiting the fair.  Mr. Kumar said that special attractions
of this fair include designers’ forum and recycled products.

Which Are The Top 5 EU Countries With UK Citizens?

How Much of Earth’s Surface Water Is Suitable For Uses Like Drinking and Irrigation?

Do You Know How Many UK Citizens Are Living In the EU Countries?

By 2030, Half of Europe’s River Basins Could Be Affected By Water Scarcity, Says Report

How Many Fake Euro Banknotes Were Withdrawn From Circulation In 2nd Half of 2019? – Find The Numbers Here

By 2030, Half of Europe’s River Basins Could Be Affected By Water Scarcity, Says Report

Do You Know How Many EU Citizens Are Living In the UK?

How Many ‘Euro Banknotes’ Are In Circulation? – Find The Answer Here

How Much Of The Earth’s Surface Is Covered With Water? – Find The Answer Here

Is Head-shaking To Get Rid of Water From Ears Harmful To Brain? Scientists Say YES

Is There Any Relation Between Hiccups and Brain Growth? Scientists Say YES